CPAC Sides With Putin Against the West

They deleted their tweet of support, but as all should know by now, the Internet remembers: 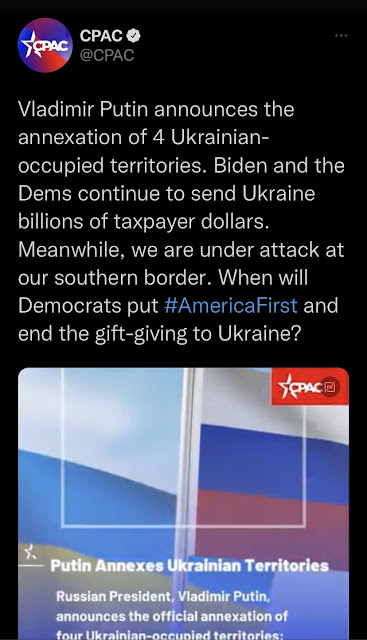 CPAC swallows Russian propaganda whole, root and branch. If Putin claimed that Paris was historically Russian, because the Imperial Russian Army marched into it in 1814, the tools at CPAC would earnestly parrot that claim.

It really is "same shit, different war". Their intellectual ancestors in 1938 probably thought that Nazi Germany had a valid claim to the Sudentenland.

One thing is clear, if it ever wasn't: The far-Right in this country is fascist. They hate freedom, they hate liberty. They are racist, believing that they are genetically superior to everyone else. They claim to love America, but they hate everything about America that makes it strong. They are not patriots. They are the same stripe of vile excrement as the Nazis and the Ruscists. People who are CPAC members should be given materials on how to apply for a Russian passport and how to learn Russian; we should be raising money to help them to emigrate to a country more to their liking.

House Rules #1, #2 and #6 apply to all comments. Rule #3 also applies to political comments.

In short, don't be a jackass. THIS MEANS YOU!
If you never see your comments posted, see Rule #7.