All three men charged in the death of Ahmaud Arbery were convicted of murder Wednesday.

The jury reached its decision after more than 10 hours of deliberations following a trial in which prosecutors argued that the defendants provoked a confrontation with Arbery and defense attorneys said their clients were acting in self-defense. 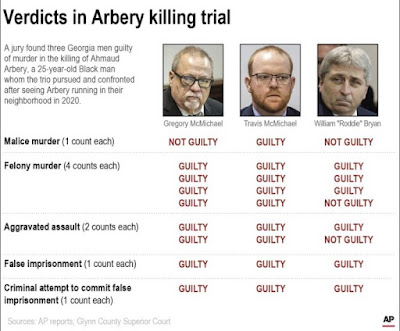 I did not expect this verdict. I expected either an acquittal or a hung jury, especially given the defense's racially-charged juror selection and their use of the Scary Black Man Defense.

But the jury apparently didn't buy that shit. Apparently they agreed that there was no reasonable grounds to suspect a man in jogging clothes who was carrying nothing could be reasonably suspected of being a burglar.

Maybe things are changing. But as others have pointed out, the defendants' buddies in local law enforcement and in the prosecutor's office did try to sweep this murder under the rug. Only the video going public in this case (and in the murder of Laquan McDonald in Chicago) made prosecution a possibility.

“Let the word go forth all over the world that a jury of 11 Whites and one Black, in the Deep South, stood up in the courtroom and said that Black lives matter,” - Rev. Al Sharpton

House Rules #1, #2 and #6 apply to all comments. Rule #3 also applies to political comments.

In short, don't be a jackass. THIS MEANS YOU!
If you never see your comments posted, see Rule #7.