President Donald Trump, the historically prolific tweeter of political barbs and blasts, threatened social media companies with new regulation or even shuttering on Wednesday after Twitter added fact checks to two of his tweets. He turned to his Twitter account — where else? — to tweet his threats.

Let's be clear on this: Twitter didn't censor Trump's tweets. All they did was fact-check two of them.

But President Karen is triggered, triggered, by anybody who has the temerity to point out that he lies. He thinks it's censorship. 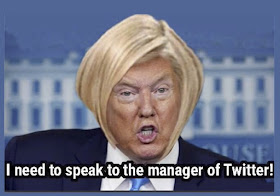 It's nothing of the sort. The tweet is still there. Anybody can read it. It's just labeled for what it is: A motherfucking lie.

But President Karen can't have any of that.