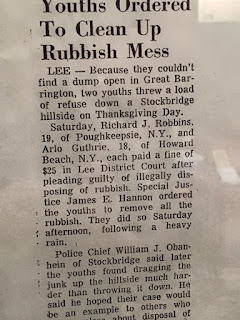 Playing the entire song on the radio was a Thanksgiving tradition. Some of them were commercial stations-- almost nineteen minutes of no commercials. And some of them played it twice, at noon and 3 PM.

It was basically true, at least the first part. The judge in the tale was really blind, he had a Seeing-Eye dog. He played himself in the movie (as did Officer Obie).


I hope that if you're in America, you and yours have a good Thanksgiving. Try not to punch out your racist/antivaxx uncle or your commie nephew.

And please, enjoy the day without resorting to rampant consumerism.

Or burning down your hostess's house.

So celebrate the day when people, who were being oppressed for their religion, landed on a new land where their descendants could do unto others as was done unto them.